WE FLY TO PARADISE IN 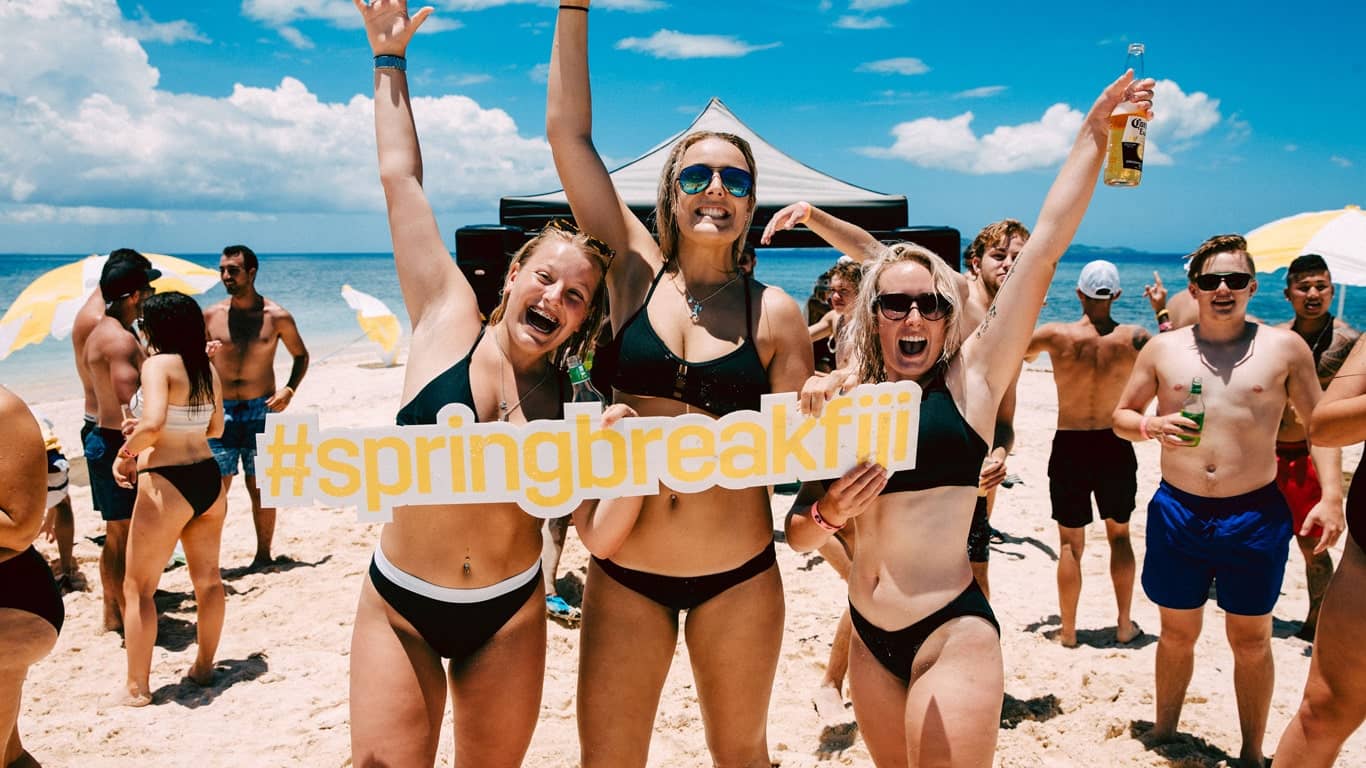 If it weren’t for MTV and so-bad-they’re-good movies like SPRING BREAKER it’s safe to say that the celebration of Spring Break as a  holiday would never have reached us over here in New Zealand.

We’ll admit, we’re playing with a loaded term but before we start paving the way we should probably learn where we came from, understand the history behind SPRING BREAK™ Experience FIJI and why it’s become such a big deal.

Join us, if you will, on a not-so-geeky journey through the life and times of SPRING BREAK™ Experience FIJI!

A Celebration of Spring
So, what’s Spring all about? New stuff, right? New lambs in the fields, whole new set of weather and (according to the movies) bikinis, booze and debauchery!
Spring is the season of rebirth and renewal. Some people claim a spiritual connection to this season; we’re not quite as sentimental, we just love an excuse to party.

The Greeks
If you think the bikinis, booze and debauchery of the teenies is a little OTT let’s take a look at our predecessors; we have nothing to be sorry for! The ancient Greeks were masters of getting boozed up and brazen! Taking pants off in public and dancing in the streets, they were well before their times! The ancient Greeks behaved in this daring way to celebrate the festival Anthesteria.

The Anthesteria Festival was dedicated to worshipping the God of Theatre, Sex and Booze (pretty much, historians may disagree) whose name was Dionysus.
He sounds like a total badass if you ask us, a God worthy of being worshipped for five days in the Pacific! Don’t you agree?

Supposedly during the Anthesteria Festival, the ancient Greeks would organise wine sculling competitions and dance the night away!

After the threat of the World Wars had lifted young people realised that there was more to life than farming and making babies. Prohibition in America was scrapped meaning that people could legally drink alcohol.

In this new and free age, Americans headed to the sunny coast of Florida and the modern Spring Break was born. Spring Break was a chance for the boys to let loose and the girls to look pretty…it was still all a bit one sided at this point!

MTV is born and the music video has changed the way people observe pop culture. Yes, MTV hasn’t been around since the dinosaurs, it’s still a baby really!
MTV first covered Spring Break in 1986 and filmed all the action kicking off on Daytona Beach in Florida; alas the modern Spring Break was born.

The Noughties
So, there’s a pretty long gap between the Anthesteria Festival and the establishment of the modern day Spring Break from 2000 onwards; a few centuries in fact. From the 1950-90s the seedlings were very slowly reaching towards the sun…Bang, hello 2000. What’s on?

Travel has become far more accessible for everyday people and the stresses of the modern world are mounting up. Young people are experimenting with life and seeing how many boundaries they can break.

NEW ZEALAND & AUSTRALIA
TourismHQ under the trademark is setting out to deliver SPRING BREAK™ Experience FIJI with all the upsides and none of the downside risks inherent with offshore operators. With the trademark in play we’ve been able to partner with the best operators in the industry to deliver a safe and secure range of experiences under SPRING BREAK™ Experience FIJI trademark without cowboys entering the market and ruining it for everyone!

NO THANKS, I don’t want to go on an adventure.
X

PACKAGES ARE CURRENTLY CLOSED TO VIPs ONLY

If you have a VIP Pre-sales Password enter it here:
DON’T HAVE A CODE?